Why You Need A Qualified Instructor aka Choking vs. Strangling

A few minutes ago a student of mine sent me a link to a youtube video where two girls are playing around with a choking technique. Apparently, one of the girls, the one being choked, is an amateur stuntwoman or sorts and as numerous videos of herself doing dangerous things sort of like the “Jack Ass” TV show.

This video is a great example of a couple of things like stupidity, natural selection, and of course the fact that if you film fairly attractive girls doing something people will stick around and watch it until the end. In this video on girl is going to render the other unconscious using a “rear naked choke.” The problem is that they don’t know what they’re doing and the one girl ends up choking the other girl until she coughs or flail her arms and then the first girls lets her go and after a pause they start over. This goes on for 12 minutes and the girl never does pass out. The video can be seen here: https://www.youtube.com/watch?v=Vqlze-aPaGY

Here is the first issue I’d like to highlight, the girl being choked is named Rachel Star and from quickly browsing her videos on youtube it does appear that she has some degree of actual martial arts training. There are videos of her using the nunchacku, possessing various other pieces of martial arts equipment, and doing some kickboxing. This girl has most likely received some degree of training in some art form.

So, either her instructor wasn’t good enough to impress upon her that these techniques are dangerous and shouldn’t be played around with or they did impress that upon her but she thought she was capable of doing so anyway. The fact that the technique was applied wrong and that she couldn’t quickly discern that proves that she is not qualified to be doing that technique.

While you should always practice your techniques at home, the parts where you actually inflict trauma to another person should only be done under the careful supervision of a qualified instructor. To do otherwise is to invite serious injury.

The second issue I’d like to highlight is one of my pet peeves when it comes to marital art terms because when people engage in these it shows a lack of understanding that they should have. My first pet peeve is when talking about firearms and someone calls a magazine a “clip.” While minor, this bothers most shooters because it signals that the person is engaging in a very dangerous activity without receiving the proper training. The second is when people don’t know the difference between a “choke” and a “strangle.”

The technique in questions is very very old. I learned it as the “Thugee Stranglehold.” One of the first mentions of this technique is from records of the Thugee who were a group of murderous bandits that worked along the silk trail in Asia. They would stalk a caravan of merchants, sneak into their camp at night, silently kill everyone using the Thugee Stranglehold or strangling them with lengths of silk. Then they would dump their bodies in pre-dug graves and make off with all the goods causing the caravan to simply disappear. This group is where we get the term “thug” from today.

The Thugee Stranglehold is one of the first known names of the technique. When the US Marines first learned it they called it the “Japanese Stranglehold” and after a while it became known as the “Marine Stranglehold.” However, the name that has lasted the longest is the name from Judo. Judo calls this technique the “Rear Naked Choke.” “Rear” because you’re doing it from behind, “naked” because you aren’t using clothing or any tool to do it, just your own body, and “Choke” because…I really don’t know why.

The Japanese call this type of technique “Shime-Waza” which translates into “Constriction Technique.” I’ve spoken with several people skilled in Judo, Jujitsu, and Aikijitsu and some tell me that the Japanese did make a distinction between choking and strangling and other tell me they did not, they have 36 techniques that were “shime-waza” and they didn’t make that distinction. So, I simply don’t know if the Japanese referred to this technique as a “choke” due to ignorance, non-distinction, or it was mistranslated and never corrected.

[NOTE: I was just recently told in Jujitsu this technique’s original name was "Hadaka Jime" which means “naked strangle” but when the sport of Judo came about it was switched to rear naked choke. I can’t vouch for this being true, however.]

There is a difference and as martial artists the difference is very important to know. Simply, a choking technique compresses the windpipe causing the person have difficulty breathing. From there they will choke, panic, and eventually pass out. Choking is horrible. Depending on the amount of pressure on the windpipe it can take several minutes for them to pass out and they will be left with a very sore throat afterwards. When they wake up it will hurt to talk or swallow and they will often have a headache. Before the pass out they will panic, flail their arms, and can be very dangerous. Not being able to breathe is the scariest thing for the human brain. 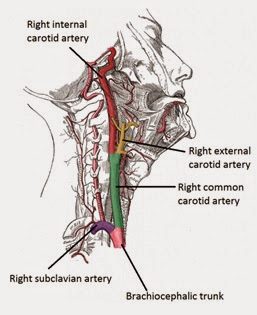 A strangle, or strangulation technique, leaves the windpipe alone and instead compresses alongside the windpipe to seal off one or both carotid arteries. The carotid arteries deliver blood and oxygen to the brain and when that gets cut off the person begins to feel light headed and weak. If the restriction is great enough the person will pass out. A solid strangulation technique like the Thugee Strangle Hold can render a person unconscious in about 5 or 6 seconds and can be fatal if applied for longer than 2 minutes.

After a person passes out they start to convulse and sometimes even snore. If you’re intention is to just knock them out that is the best time to let them go. If you let them go when their body goes limp it could be a trick to get out of the hold but it is very hard to fake the convulsions convincingly. The strategy is to let them go limp and then wait for a change in their breathing and the start of convulsions before you let them go.

Typically, a person is unconscious for a few seconds and as long as a minute and when they wake up they may have a little headache or feel a little weak but that soon goes away when they start to move around.

The difference between the two are huge; a choke hold causes a person to cough, panic, flail their arms and fight back so it takes time, makes noise, triggers the “fight or flight” instinct and when a person wakes up they are in a good deal of pain. Strangulation causes a person to get light headed and weak and then just passes out very quickly. It is quick, silent, and if you wanted to kill someone you could just throw it on a person for 2 to 3 minutes or, what probably happened far more often, just long enough for them to pass out and once they were out use a tool like a knife to finish the job. 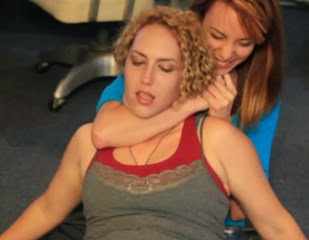 From the screen cap of the video I placed here you can clearly see how most of the force is going on the girl’s windpipe which is why she choked and was in pain instead of simply passing out.
Posted by Matthew Schafer at 5:59 PM No comments: