I’ve always felt very fortunate that I’ve never really been injured during training.  At the time of this writing I’ve been in the martial arts for 28 years and I’ve seen a lot of people have to either put their training aside to recuperate from an injury or quit the martial arts all together because of it.  The closest I’ve ever been to getting injured was once I got kicked in the side of the head by another student that I didn’t realize I was sparring (he got lost in the rotation and just figured he’d attack me while I was sparring someone else) and he kicked me so hard I had severe neck pain for two weeks and couldn’t turn my head.  I’ve also been knocked out several times so I guess you could say I’ve had a concussion or two.

The three biggest injuries I’ve ever seen during training, which all happened while I was studying Tae Kwon Do, was a guy tearing his ACL during a front kick because he kept his base foot pointed at his target, one of the black belts get carried away during sparring and take a side kick that broke two rips and bruised his liver, and another young man who had to put his black belt test on hold because he broke his arm during a punch.

When it comes to doing martial arts techniques most systems teach you to keep your shoulders back and relaxed and keep your elbow in and pointed down.  Not only is this the strongest way for you use your arm (allowing you to deliver more force during a strike) but it is a smaller movement that is harder for an attacker to see coming.  There are a lot of advantages to keeping your elbow in and down, but a main one is it protects your arm from being broken during a punch or grab.

One thing that I noticed while studying Chinese Martial Arts and Ryuku Kenpo is that if they see you punching with a horizontal first and elbow pointed outward an arm break is one of the first techniques they will go for.  One of the first lessons I had when I was a child starting martial arts was that you never wanted to punch like that.  I asked my teacher why and he responded by making me hit a 100 lbs. heavy bag for a half hour.  Once that was done he ask me how my arm felt and I responded that my wrists were a little tender and I could feel it in my neck.  He explained that punching with a horizontal fist was a bad position for my wrist and that is why my wrist was sore and that soreness reached up to my neck and shoulder.

Next he had me put on some light gloves and told me to punch him full contact.  I tried to punch him both a hard as I could as well as fast as I could and he stepped out of the way each time.  After about 10 minutes he explained that punching that way naturally lent itself to raising the shoulder before the punch came so all your opponent had to do is move out of the way as soon as he saw your shoulder move.

Finally, he told me the biggest reason why you shouldn’t punch with your elbow pointed out is that if you run into a “real martial artist”, especially if you go to China or Okinawa, and throw a punch like that they will snap your arm like it was a twig.  He then showed me if you take a small step when the punch comes so it just misses, and then you bring your arms up and rotate towards the arm you will easily break their elbow if it is pointed outward (but not if it is pointed downward).  He said the primary techniques martial artist in China and Okinawa go for in a real fight are kicks to the knees and groin and strikes to the eyes and throat; but if they see you sticking your elbows out they’ll back up a little and open themselves up for a punch so they can side step it and break your arm. 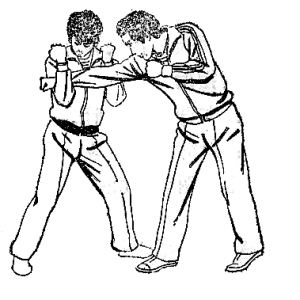 That is exactly what happened during that Tae Kwon Do class where the kid got his arm broken during a sparring session.  He and another black belt candidate were sparring and when a right punch came the 2nd student stepped to the left side allowing the punching arm to miss and pass between his arms which here held in a boxing position and then the 2nd student rotated back to the right to throw a left  punch to the 1st student’s body.  However, by pure accident, the wrist of the 1st student’s punching arm got pinned by the right arm of the 2nd student which was up protecting his jaw and the sharp rotation caused the arm of the 1st student to stretch and the front of the 2nd student’s left shoulder to slam into the back of the elbow breaking it.
Posted by matthew schafer at 2:47 AM No comments: