The AR-15 is The Ideal Weapon For Home Defense 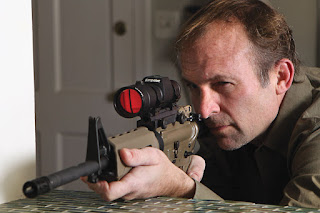 Multiple tests disproves years of conventional thinking and shows yet another reason why the AR-15 Modern Semi-Automatic Rifle is the ideal weapon for home defense.

A lot has been written about the AR-15, and weapons built on similar platforms, and most of it has been written by those with little to no experience or education with firearms.  The AR-15 is nothing more than a modern rifle.  No different from how today’s smartphones have advantages over those built just 10 years ago, being made with modern technology the AR-15  is lighter, faster, more accurate, easier to use, and just plain better at its job then yesterday’s rifles.  Also, it is safer too.

Studies done by the FBI and a few private organizations have demonstrated that an AR-15 and the .223 round it fires is a safer home defense option then most other firearms and since the studies largely consist of firing various weapons into walls and other structures anyone can reproduced the studies themselves to confirm the results.

Before I get to the study itself I want to go over a couple reasons other than safety as to why the AR-15 is the ideal home defense weapon.

The first reason the AR-15 is superior is that it has very little recoil.  For the avid shooter this isn’t that big of an issue; someone who spends ample time on the range develops the proper body mechanics where they can deal with recoil and still use the weapon effectively.  However, if we’re talking about home defense we’re probably not talking about a situation where everyone is an avid shooter.  A situation I see over an over is one where a husband shoots enough to be comfortable firing a wide variety of firearms, the wife shoots little to not at all, and their kids run the spectrum.

The average man in America spends about 4 waking hours during the day with his family so what is the wife to do if she has to defend the home by herself or she has to aid her husband?  The solution to a lot of people is the shotgun.  A shotgun is not very difficult to use, it is intimidating to the guy on the other end, and I have yet to hear of a situation where it takes more than two center mass hits to put a person down.  While a shotgun is a great weapon it has a lot of kick and if you don’t spend enough time learning to shoot it you may end up hurting yourself when you have to fire it.  In addition, due to the amount of recoil it is not a fun firearm to shoot for smaller individuals like women.  Since it is not very fun to shoot for smaller individuals most of them don’t practice and that can be a deadly mistake.

If a gun isn’t fun to shoot then you probably won’t shoot it.  That is where the AR-15 comes in.  The AR-15 is easy to operate with little practice, had virtually no recoil, and it is a lot of fun to shoot.  Since it is fun more people that are not avid shooters are far more likely to spend time getting the hours in at the range that they need to be comfortable firing the weapon.

Over the last 15 years I’ve spoken with a lot of women, a lot of firearm salesmen, and a lot of firearm instructors and the vast majority of them tell me that when it comes to handguns, shotguns, or an AR-15, more women prefer the AR-15.  Women typically find it easier to hold and fire than a handgun, it is not as intimidating to shoot as a shotgun, and the size and overall capability of the weapon give women more confidence than either a handgun or a shotgun.

The second reason the AR-15 is superior is its magazine capacity.  The standard magazine carries 30 .223 rounds and any time you go into a fight you always want more ammunition, not less.  Shotguns have traditionally been the go to weapon for home defense and models like the Mossberg 500 and Remington 870 have been the most popular.  While these are fantastic and very effective weapons having a capacity like 6 +1 does leave a little to be desired.

If you have to be involved in a home defense situation the ideal one is where you see the intruders coming, have time to get your weapon and the other members of your family to a safe place, and then merely announcing that you’re armed or showing the weapon is enough to scare the intruders off and make them run away.  If you’re not that lucky then hopefully firing a shot or two is enough to scare them off.  Unfortunately scaring off a criminal is something that you cannot count on.  What might scare one person might not bother another, plus over half of criminals are under the influence of drugs or alcohol during their crimes so trying to determine how they’ll react is unreliable.  The only thing that we can count on is how the body works and that the only way to effectively stop each and every body on the planet is by breaking it.  In other words, force is the only thing we can rely on to keep us safe in this situation.  If they get scared and run away then that is great but we cannot count on that.

A quick true story I tell often when I teach self-defense classes is about a young mother in the Midwest who was home alone with her baby while her husband was at work.  In the middle of the day she heard someone trying to kick in her front door.  She grabbed her baby and her gun, a .38 caliber revolver, and ran upstairs just as the front door finally flung open and she had just enough time to get to the attic before the man entered her home and started up the stairs.  She sat holding her baby with her gun pointed at the top of the attic stares when suddenly the man’s head popped up and he started to come up into the attic.  She fired all 6 shots from her revolver shooting him in the head 5 times.  Luckily for her, since she was now out of ammunition and defenseless, he panicked and he ran out of the house, jumped into his car, and drove away.  The police later found him a few miles away in his car dead.

This situation could have easily gone the other way; after getting shot the intruder was alive for a good 5 minutes before he died and that would have been more than enough for him to have seriously hurt or killed both the mother and her baby.  This story is a perfect true life example of why firearms should hold as many rounds as possible.

One of the big concerns in home defense is “over penetration.”  Over penetration means what happens if the bullet you fires penetrates too much, or in other words what if the bullet you fire both hits, and then passes through, the person you’re shooting at or you miss the person you’re shooting at and now the bullet is loose in the house.  You don’t want to shoot at an intruder only to miss and have that bullet go through an interior wall and hit a family member asleep in their bed.

The common thinking has been that a handgun is great for home defense because it might go through a wall or two but then stop, and a shotgun is great because it might go through one wall but due to the spread it probably wouldn’t do much more than that.  Rifles have been frowned on by a lot of people because the thought is that if you missed the round would not only pass through your interior walls but perhaps fly down the street and hit your neighbor.  Now we know better.

There are numerous tests and studies out there, all of which anyone can reproduce for themselves, by a variety of organizations like Outdoorhub and Gunsite Training Center but the most well-known study was done by the FBI.  The FBI’s Firearm Training Unit at Quantico, VA tested the penetration capabilities of various .223 rounds as well as other rounds to see which round was the safest for agents to use during close quarters hostage rescue situation.  The results were that the .223 soft tip and hollow points penetrated less, on average, then even pistol rounds.

In a study segments of interior walls were built to code and then 4 of them were placed 8 feet apart to simulate three interior rooms.  A shooter then stood 8 feet away from the first wall and fired a variety of rounds including both .9mm and .45 pistol rounds, a .12 gauge shotgun shooting deer slug, and an AR-15 firing standard .223 rounds.

What they found was that both the .9mm, .45, and .12 gauge rounds passed through all four interior walls.  This means that if you fired at an intruder and missed with any of these rounds they could potentially fly through not only 3 interior rooms but possibly exit the house with the potential of entering a neighbor’s home or hitting someone on the outside.

Only the .223 round fired from an AR-15 failed to penetrate all four walls.  Most .223 rounds were found embedded in the wall #3.   Why didn’t this rifle round just rocket through all the walls and down the street?  The answer is because it is a precisely made modern round designed to tumble on impact.  When a .223 round hits a person it begins to flatten out and starts to tumble end over end.  This tumbling allows it to create a large cavity inside a person allowing for maximum tissue damage and creating extensive bleeding.  Tumbling also causes the round to expend its kinetic energy very quickly.

Every round entered the first wall tip first creating a small circular hole but at the second wall most .223 rounds created a rectangular hole because by that point the round was tumbling end over end.  By the time the .223 round got to the third wall it was no longer traveling in a straight line and the rounds started to hit just the edges of the third wall where it failed to penetrate and became lodged.

What this means for home defense is not only is the AR-15 suitable for home defense due to its ergonomic and ease of use capabilities, it’s very low recoil, its standard 30 round magazine capacity, and the fact that it is fun to shoot and gives shooter greater levels of confidence; it also is the safest firearm that you can effectively use for home defense.   While you always have to be mindful of what you’re shooting at and what is behind it, there is less chance of hitting or killing an unintended target with an AR-15 than a shotgun or the two most commonly used home defense handgun rounds.

So why does anyone need an AR-15 to protect their homes?   It is a modern weapon that does its job better and more safely.  Since over penetration is a real issue and has cost people their lives we can safely say that if more homes used AR-15 for protection then shotguns or handguns fewer unintended people would lose their lives.
Posted by matthew schafer at 3:21 PM 1 comment: